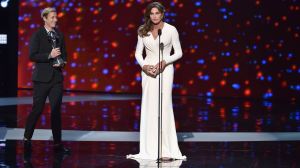 Maybe I am a little late on this post since it’s has been four days since Caitlyn Jenner accepted the Arthur Ashe Courage Award at the 2015 ESPYs and almost two months since the Bruce Jenner interview with Diane Sawyer on 20/20. But it wasn’t really relevant to my life until yesterday.

Anyone following this story – which is so many of us – know that there has been a lot of heat regarding the choice of honoring Jenner with the Arthur Ashe Award (world-renowned sportscaster Bob Costas and Director Peter Berg among the open critics), and skepticism about the pomp and circumstance around Bruce coming out as Caitlyn, questioning her intentions. I am not going to judge how one person’s courage ranks against another’s or theorize about the purpose of the publicity. I will say; however, that I do agree with Jenner’s main point in her acceptance speech. I want my daughter to grow up in a world where we all accept one another despite our differences.

That grand vision is great, sure. Yet, it’s the everyday stuff, the small things, that seem more significant to me now. I was at  Wilhelmina Philadelphia helping out with an open call for new models and actors. I was measuring the bright-eyed hopefuls, only taking bust/waist/hips measurements of women. As I went down the line approaching the women, skipping the men, I could see a transgender young person at the end of the line. My immediate thought was, “Do I measure her?”

I walked up to her, smiled and pulled out my measuring tape. Because of Caitlyn Jenner I understood and accepted the fact that this young person self-identifies as a female, so I treated her like all the other ladies in line. Without Caitlyn, I don’t think I would have known what to do.

Thank you, Caitlyn Jenner. Small victories are better than none.

P.S. The only thing that annoys me about the whole thing is that Caitlyn looks better in that white dress than I ever would.