NetFlix recently announced that they are now offering employees unlimited maternity and paternity leave. According to Tawni Cranz, NetFlix Chief Talent Officer on the NetFlix US & Canada Blog, “This new policy…allows employees to be supported during the changes in their lives and return to work more focused and dedicated.” Sitting here at my computer at CaRu Entertainment, just having nursed baby at my desk, I think how great that other parents will have access to the type of flexibility I have when it comes to balancing both professional and parental responsibilities.

Then I think, “Wait, what flexibility?” I spend a lot of my days sitting at my computer typing emails with one hand holding baby with the other, moving a play mat around the floor next to my desk hoping she’ll keep herself occupied, trying to get her to sit in her Bumbo seat just long enough to make one phone call and painfully taking four hours to do things that used to take four minutes. So is this really balance or is it juggling too many things at once? In the LA Times article “An ‘Unlimited’ Parental Leave Policy Sounds Great, But Will It Work?,” Jena McGregor puts it well, “An unlimited policy sounds great in theory. Unless the culture really supports it, however, employees won’t know how to react and may even end up taking off less time than they otherwise would.”

I see McGregor’s point. I started answering emails days after giving birth not only because I guess I wanted to but also because there were no real parameters regarding my “maternity leave.” Don’t get me wrong, I feel very fortunate that I’ve gotten to spend so much time with my newborn baby while continuing to propel my career – posting #bringyourdaughtertolife on my Instagram – dragging her with me to the CaRu studio, TV sets, auditions, dance competitions. 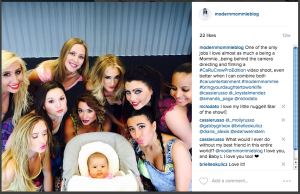 I recently spoke with a friend who also has some flexibility with her work since she works from home and we agreed that we leave most days feeling like both an inadequate mother and an inadequate professional. Like we didn’t do either well.

My boyfriend also has a non-traditional work schedule as he tele-commutes to a company based in another state. This apparent flexibility has led him to bare the brunt of parental responsibilities, things like doctors appointments, school registration, swim class, etc. Although he feels happy to get to do it all, we both wonder if it limits his capacities in his career. Would he be more productive if there were designated times for career and designated times for parenting and family time? Is any of it quality time, work and otherwise, when he is so-called multitasking? In a culture where were expected to be accessible 24/7 on our smart phones, is converting a shorter specified leave into a more open-to-interpretation policy helpful or harmful? Will people feel pressure to jump back into work sooner because there is no timeline? I sure did.

If I could do it all over again, I would have taken a specified length of time when baby first arrived just to be mom. Maybe three months. It’s hard to do when you don’t have specific permission or guidelines – that demon called “mother’s guilt” creeping into your life outside the home – let alone the financial ability to do so. Then I would have slowly transitioned back into my professional roles, now realizing that a few months off would have have torpedoed my career. I have the luxury of that kind of flexibility, so I guess what I’m saying is that I think NetFlix has it right. All mothers and fathers should.

Our smartphones and wireless Internet connections make us overly accessible. But I’d much rather try to juggle both being a parent and a professional at the same time than having to choose between the two. Thanks to NetFlix, even those with more traditional careers will not have to either.